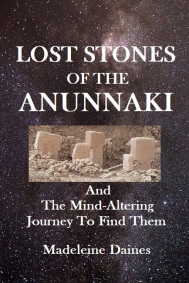 A Temple Built On Sand

Why did the people who wrote in Greek, Latin, Arabic, Hebrew, or Aramaic in antiquity never find cause to write about the Sumerian Anunnaki gods? Gilgamesh was mentioned by name early on, the antediluvian Sumerian kings also, but not the Anunnaki. Why was their illustrious name unknown throughout history until the 19th century AD when the Mesopotamian clay tablets were rediscovered and translated?

In 1970, a reputed philologist, John Marco Allegro, made two highly unorthodox and controversial claims in his book, THE SACRED MUSHROOM AND THE CROSS. He asserted that the name of Jesus was taken from that of a mushroom with mind-altering properties, and that Sumerian was not only the source of the biblical name but more generally provided the missing link between numerous later languages: Greek, Latin, Hebrew, Aramaic… Was he wrong or was he right? On one count or on both?

What might a fresh look at the Sumerian language tell us about the Anunnaki and those names that have come down to us through the myths of Ancient Greece and Egypt, the biblical texts or the history books?  About Atlantis, about the Gnostics and the Pagans, Moses, Osiris, Jesus, Odysseus, Jonah and the Whale, Mesopotamia and Tammuz, to name just a few?

LOST STONES OF THE ANUNNAKI And The Mind-Altering Journey To Find Them, reflects on the original meaning of the Anunnaki name made famous by Zechariah Sitchin, and also John Allegro’s suggestion that the earliest written language is steeped in magic mushroom lore. Along with the academic translations, these are the only two sources which have given us all our Sumerian food for thought – until now.

LOST STONES OF THE ANUNNAKI brings back to life the important words and meanings that have been glossed over, missed or misinterpreted in modern times. Following on from the retranslation of the Sumerian text known as THE INSTRUCTIONS OF SHURUPPAK and renamed THE STORY OF SUKURRU to better fit the narrative discovered there, this book makes use of lines from that text but also other referenced Sumerian writings.

It peels back the layers from assumptions made in both ancient and modern times concerning the origins of certain important names – the Sabians, the Chaldeans, Harran, Abraham – and looks for the truth in far older documents.

It digs into the messages concealed in riddles found on tablets from the Old Babylonian period, ca.1900-1600 BC.

It looks into the meanings behind the multi-syllabic names on the antediluvian SUMERIAN KING LIST (see the article on Graham Hancock’s website linked above), casts an inquisitive eye over an ancient name of the Great Sphinx at Giza in Egypt, and asks a few pertinent questions of the Gobekli Tepe stones in the language of that place.  Hold on to your hats.

The original translation titled THE STORY OF SUKURRU is available as either print or eBook through Barnes & Noble (November 30th, 2021):   The Story Of Sukurru

THE STORY OF SUKURRU is a complete re-translation of the oldest known literary text in the world today, 280 lines and approximately 3,000 words. Using an innovative yet logical method taking all the symbols/words into consideration with their independent meanings produces a result completely at odds with everything that has gone before.  One of the most important features of this translation is that it brings to light unheard of yet indisputable links to worldwide mythologies and to many languages. Since publishing THE STORY OF SUKURRU in 2017, I have written an explanatory book: BEFORE BABEL THE CRYSTAL TONGUE, published in 2019. Some further explanations are given below and the Sumerian proverbs, posted from time to time, also give an idea of the layout of my translations. A revised edition of THE STORY OF SUKURRU was published on June 9th, 2020, to include a full explanation of the recently discovered acrostic hidden therein. For those who already have a copy of the translation, THE SUMERIAN SOLSTICE RIDDLE is also discussed and the solution given on the AoM board  of Graham Hancock’s website. See the link in the Proverbs section here below. It follows on from the related riddle of the Speaking Ass.

There comes a time when the veil must be lifted or the truth about our past will be lost forever. What follows is an ancient story, a text retrieved from under the sands and then hidden again, this time in plain sight, for more than a century. It is a rare bridge that allows us to step backwards beyond every episode of our history, every written word since 2600 BCE. That the tale is obscure in some parts or appears light-hearted and even bawdy in others does not detract from its fundamental importance. Each symbol was once selected with great care to convey a multi-layered story. The dividing line between the author’s choice of symbols and the translator’s choice of words, like the dividing line between truth and lies, is an affair of the heart. The writing may be mine but the meaning of it all is of another age. This is a true translation, and truth is light as a feather, the feather of the Great Matriarch. It was carried out according to the Principle of Ma who is my judge. It begins:

Then, the Tree of Consciousness and Knowledge was there.

There was a time when bands of minstrels roved the lands of Mesopotamia, with instruments and theatre props swaying along on lofty camels. Arriving for the springtime celebrations, the harvest festival or the winter solstice ceremonies, these bards sang and played in streets and public gardens, gathering shekels from the audience as they went. Their performance would begin with a slow and sober remembrance of the Flood, of desperate people clinging to life as a great golden era passed away. Then, in true Homeric style, a minstrel would step forward to prepare the audience for their entertainment.

Control over the narratives of our past began thousands of years ago with the obfuscation of the earliest Sumerian symbols. Their meanings were scrambled and the truth about the civilisation that first created them was hidden.

Find here the first key to a magical door opening onto a place that is, at the very least, 4,600 years old. Use it to bypass ancient Greece and Rome. Use it to step back beyond the Tower of Babel.

BEFORE BABEL THE CRYSTAL TONGUE 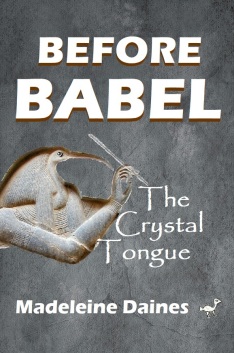 The past has been forgotten because we have lost the language of it. Bloodshed isn’t mentioned in the story of the Tower of Babel and yet a murder took place in it, the saddest story that we have. Who carried out the crime? This book points out the groundwork. The rest of the mystery is beyond my remit. I have no personal agenda with regard to history other than to find the truth by going back and picking up the thread at the oldest possible source. The result is not the expression of personal opinion or cultural, religious beliefs, but of the consultation of the Sumerian symbols themselves. They have enough to say without forcing and twisting. Coaxing is all it takes.

This book is not a translation. It’s an explanation, a study of the earliest symbols, foundation stones of many if not all later languages, showing how to read and understand them, bypassing the officialised narrative that has built up over past centuries. Making use of conventional sources to resuscitate the original meanings, I demonstrate the translation method that refutes the academic understanding of Sumerian texts. The conclusions are all grounded in substantiated findings based on the forms of the old pictograms, their given and their forgotten meanings in context.

Serving to further explain the importance of THE STORY OF SUKURRU with its many references to Egyptian lore, biblical stories and other worldwide myths, BEFORE BABEL THE CRYSTAL TONGUE  presents images of over 150 symbols. Many of them are discussed individually and in context. Begin to interpret this most sacred of languages where each symbol has inherent meaning, and where the placing of each symbol follows rules that are not found in modern grammar books. It can be likened to a game, a code, a riddle. At the heart of it, a Great Magician. The old Sumerian symbols, still warm from his touch, are waiting to explain themselves. 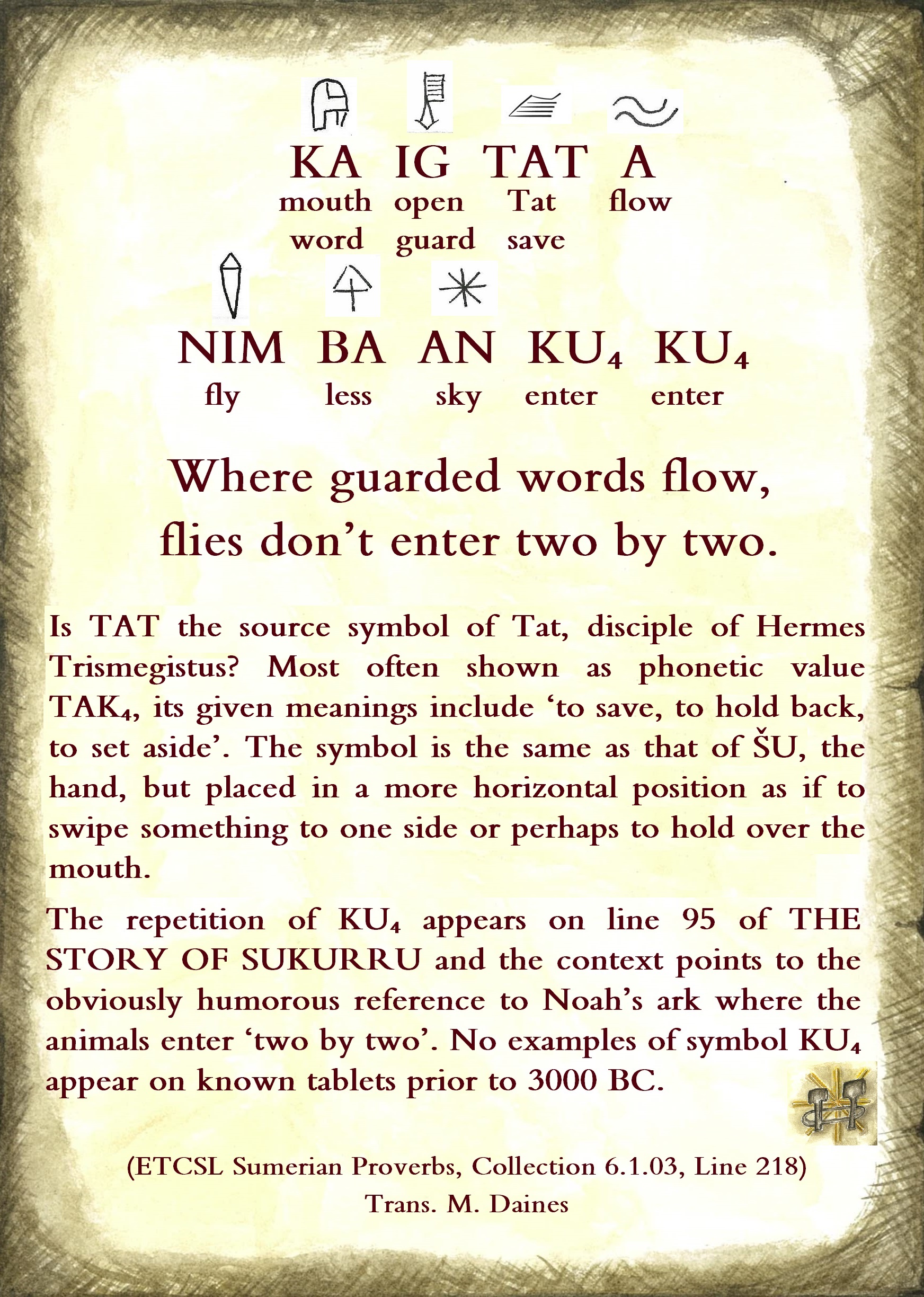 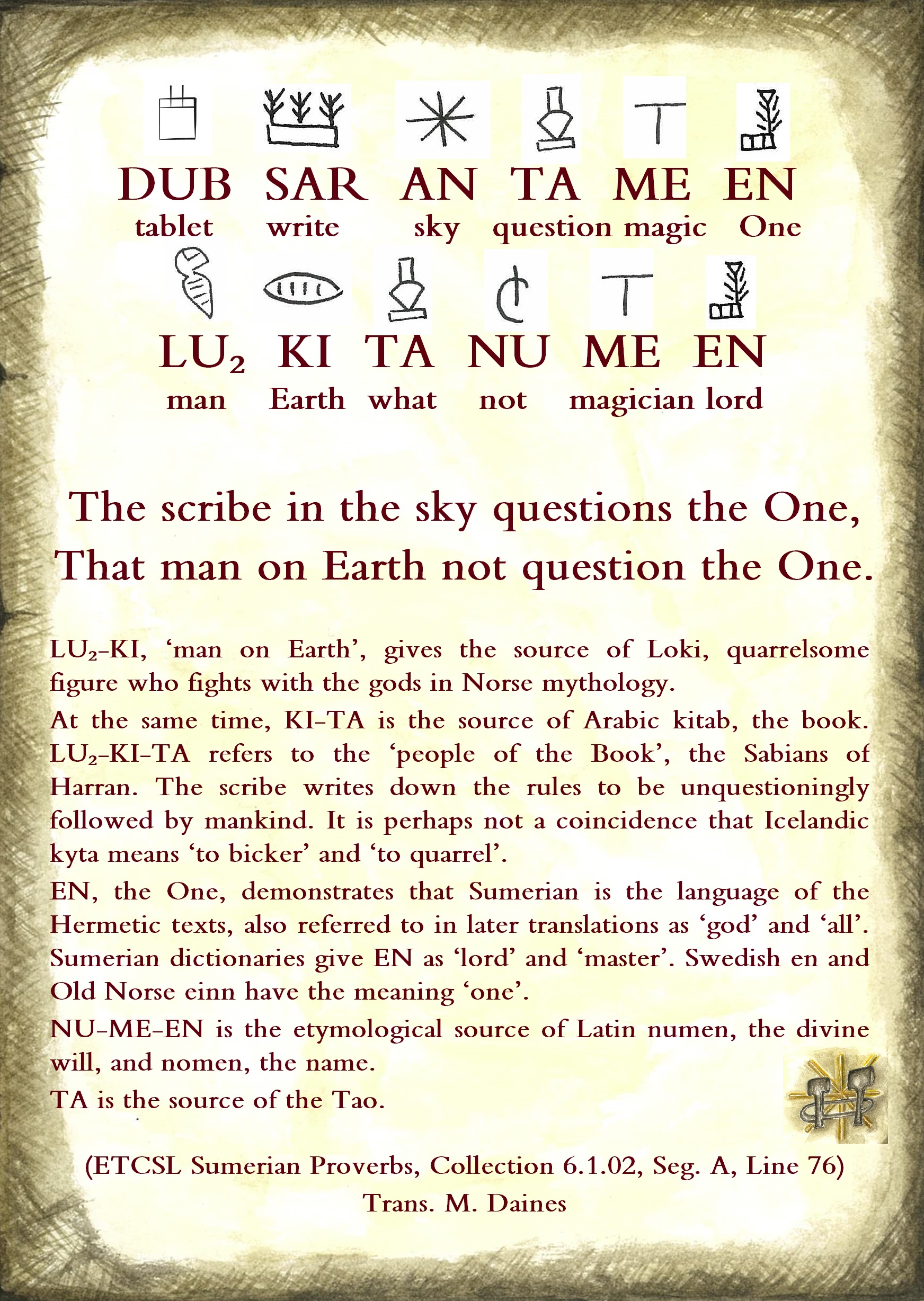 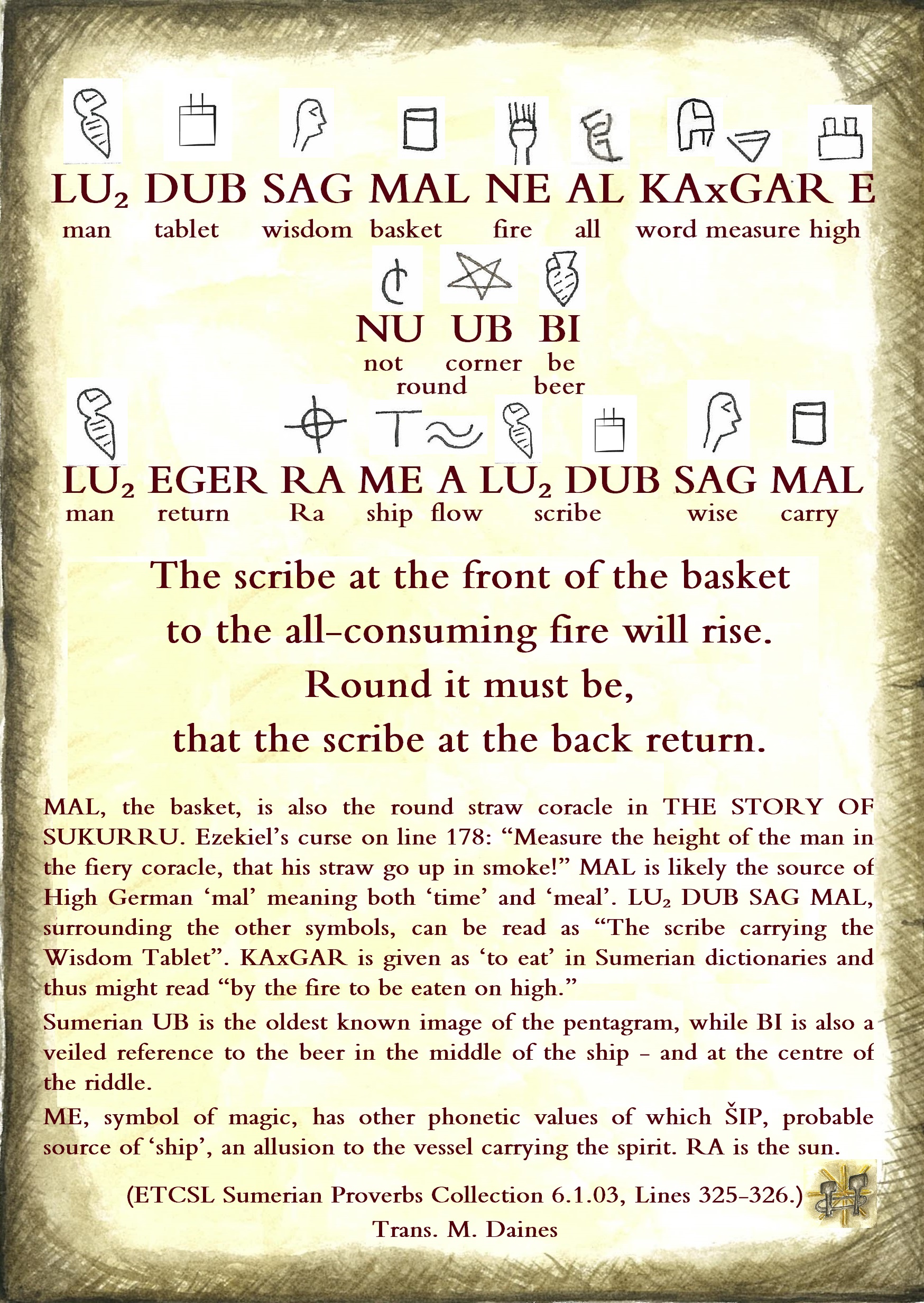 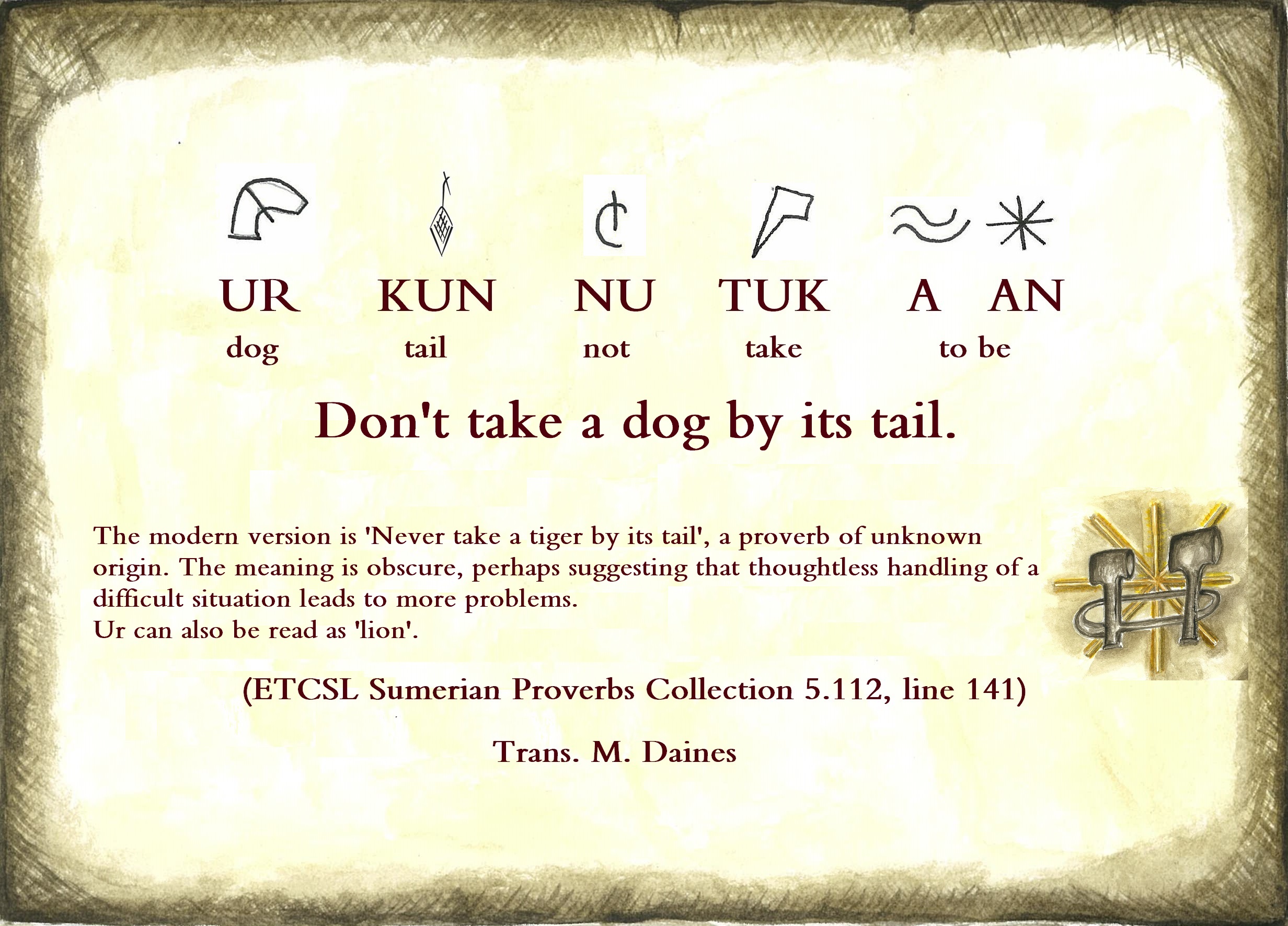 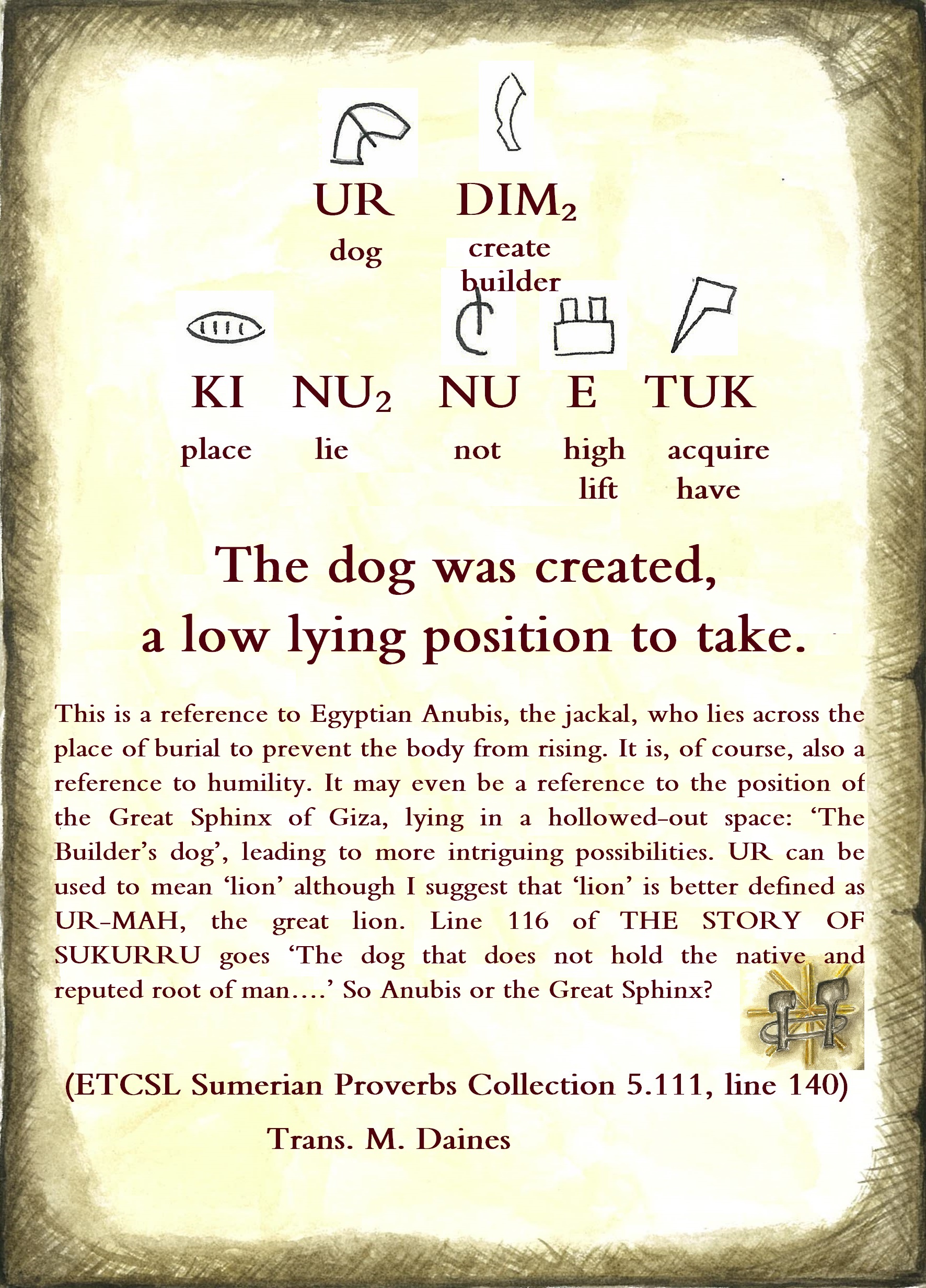 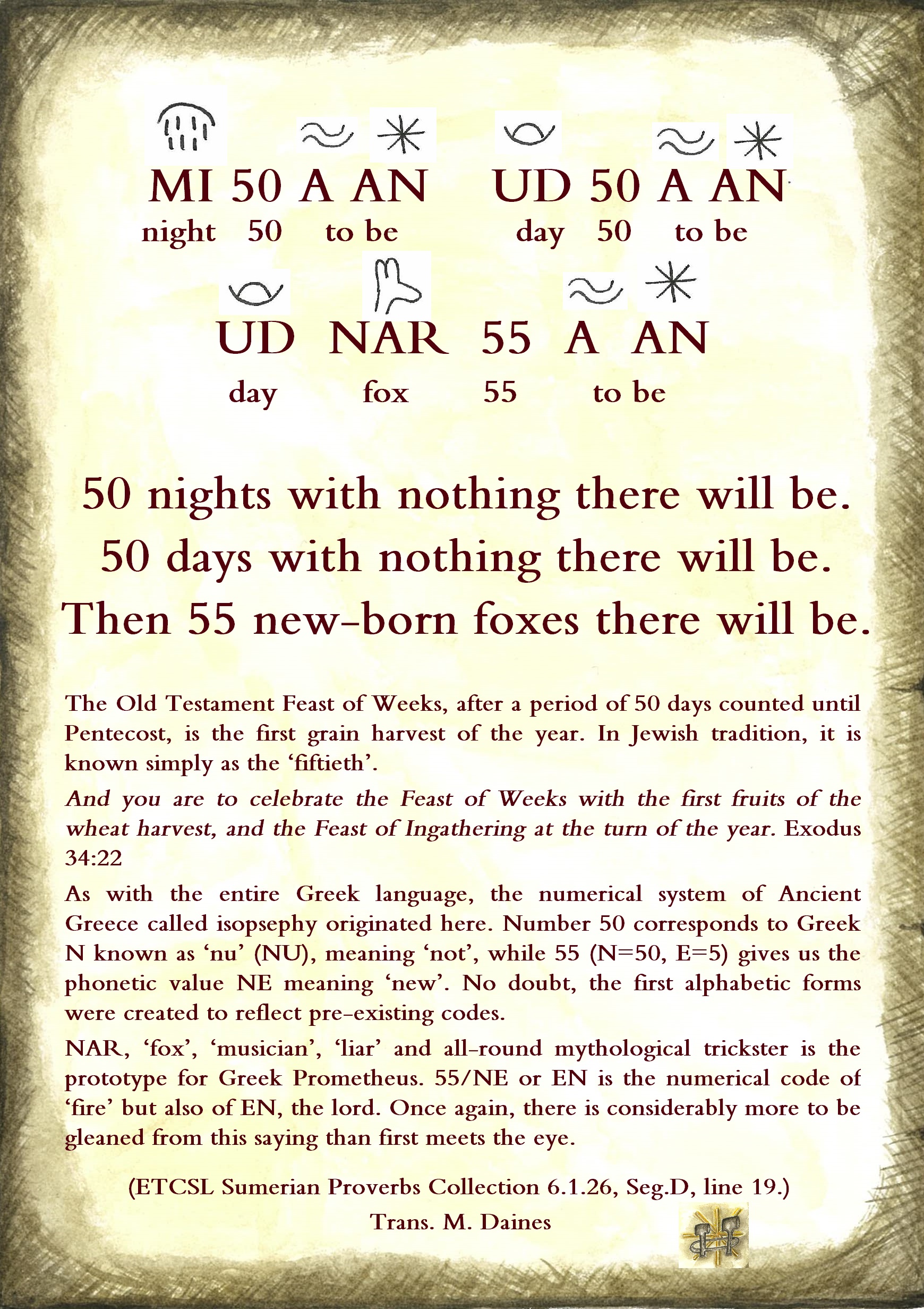